The Truth About Two-Way

Two-way traffic is not a new concept. In fact, every one-way street in the United States was at one point in time open to two-way traffic. While conversions to one-way traffic took place over various decades (mainly from 1950-1970), the reasoning behind the switch was almost entirely universal: to push downtown traffic through as fast as possible. Now, decades later, these policies are being reexamined, as many downtowns across the country are once again converting back to their original two-way forms, witnessing a multitude of benefits in the process.

• Walkable Streets – Two-way conversions have been proven to be the most effective method for reducing collisions and run-ins with pedestrians, creating a safer environment for both walkers and bikers, alike.

• More Accessibility – By replicating the two-way pattern already shared by the majority of our roads across the country, our downtown streets become less confusing and more accessible to visitors from outside of the area.

• Safety – In addition to improving walkability, two-way streets have been proven to help reduce crime by making drivers more aware of their surroundings.

• Increased Property Values – Two-ways streets have been known to increase property values for landlords resulting in more tax revenue for the city.

• Reduced Vacancy Rates – Nearly every community that has converted from one-way to two way streets has seen a reduction in vacancy rates, often within the first five years of conversion.

In addition to the more general benefits of two-way conversion, Water Street will also see some specific changes that will result in the following gains:

• Higher Daily Traffic Counts – According to a study published by Maine Traffic Resources, opening Water Street to two-way traffic will result in a projected increase of 50 more left-hand turns from Bridge Street per hour, resulting in more direct access to shops and restaurants downtown.

• Increased Exposure for Businesses – Allowing southbound traffic will expose more businesses on the west side of Water Street to more motorists, with visibility increased as a result of slower speeds and greater awareness of the area’s surroundings.

• ADA Accessibility – As part of the two-way conversion, all crosswalks will be upgraded to ADA (Americans with Disabilities Act) compliant standards, resulting in safer, more accessible entries to our shops, restaurants and residences.

• A Greener Downtown – In tandem with two-way conversion, new trees will be planted along Water Street, resulting in a greener, more aesthetically pleasing downtown.

• New Parking Signage – New parking signs for Downtown will be produced in tandem with two-way traffic to showcase additional parking opportunities for patrons.

• Greater Connectivity with Other Parts of Downtown – With two-way conversion, travel to and from the north end of downtown will produce a seamless flow for the first time, better connecting the area north of Bridge Street to the rest of Water Street.

To take a closer look at the many benefits of two-way traffic, please reference some of the following case studies:

As construction begins, we are raising awareness & celebrating change with new t-shirts that support your downtown! Grab yours today, and show your support for Augusta!

Check back here for construction updates throughout the summer


Water Street construction starts the week of July 29th, and will last 2-4 weeks, dependent on weather.

UPDATE 7/30 - Tipdown work will continue through the end of the week. 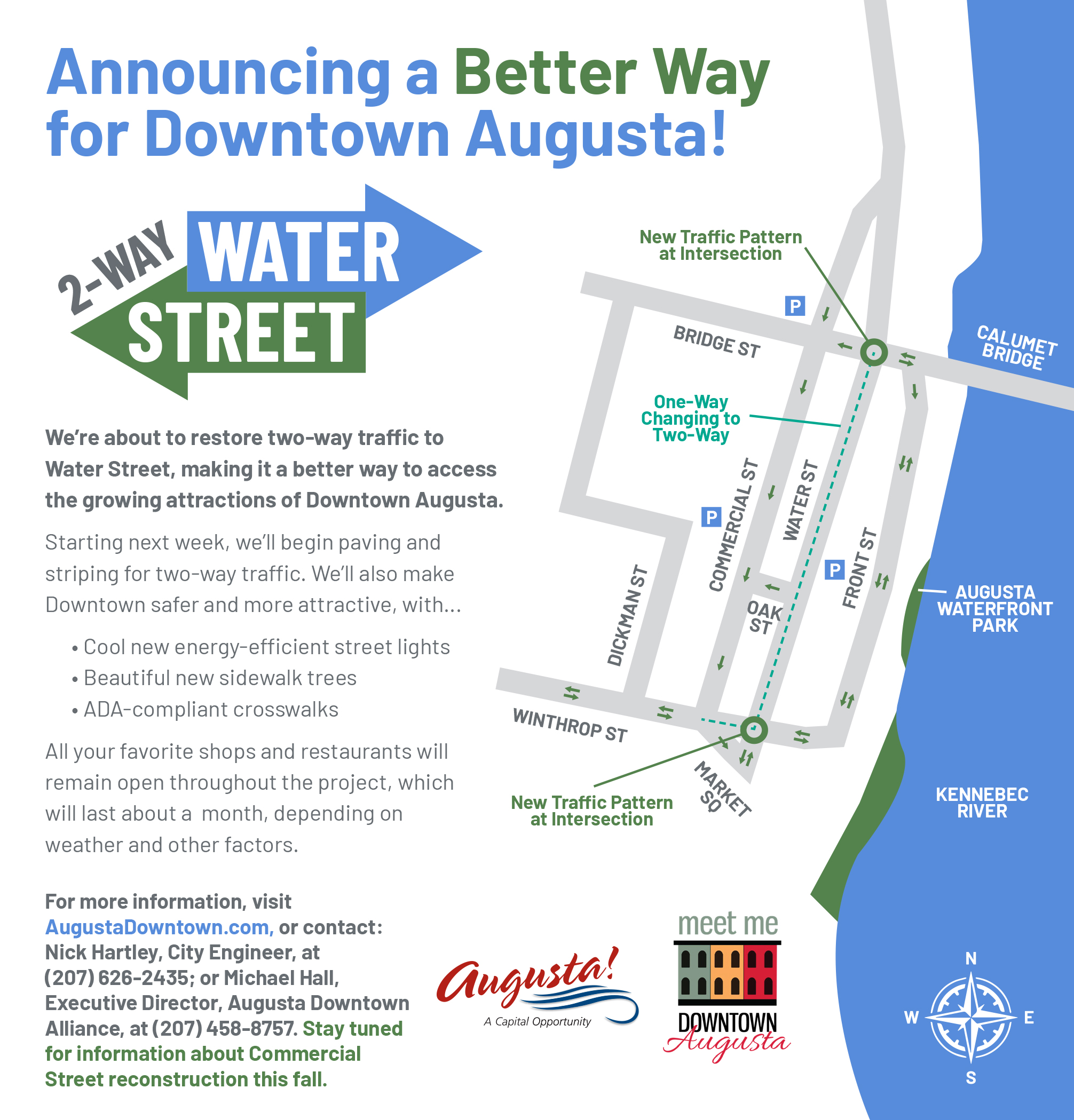 Commercial Street Reconstruction will begin after two-way has been completed.